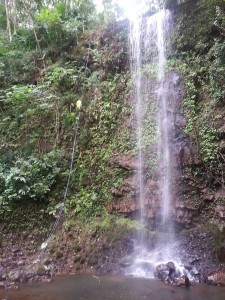 SCS archaeologists performed an archaeological inventory survey (AIS) in Kalihiwai, Kauai, as part of the Kuhio Highway Invasive Species Management project. The purpose of the project was to remove invasive and dangerous vegetation, such as the albizia, from above the roadway. The Molucca albizia is considered an invasive species in Hawaii. The trees can grow very rapidly in disturbed and wet areas and shed large branches dangerous to houses and infrastructure (wiki). In order to complete their survey in steep and vertical terrain, SCS archaeologists performed several rappels. Kihei Heiau, Bennet site 137, was said to be located at the base of a waterfall on the east side of Kalihiwai Valley. No remnants of the heiau were discovered. According to Thrum, it was “a small heiau built by a chief of the same name. Its walls were 8 feet high, and at his death its paving was removed and he was buried in his canoe in the enclosure.”